The performance SUPERQUADRA tells the story of the end of architecture.
Designs of new worlds can be found in the Tower of Babel, in ideal cities from the late Middle Ages to the American modern era. Landscapes of concrete and glass stretch through the South American jungle and across the Italian Alps. With the desire for a planned, more orderly and ultimately more just society, systems and calculations are created on the drawing boards and computers of the centuries, bringing forward ideal proportions and relationships; planned cities and buildings for a perfect life. Leonardo da Vinci, Albert Speer and Walt Disney work in fever on the axes of their new orders.

Once created, its residents find themselves in the beautiful new grids. And at some point, the inevitable happens: In the futuristic Super-Quadra 67 building complex, Oscar N. begins to make his own architectural improvements. Little by little, the building mutates, while other residents also begin to give shape to their own interests.

SUPERQUADRA is a one-hour live video performance. The stage is taken up by a landscape of sets, miniatures and models. Puppets and actors act in front of cameras and tell the story of Super-Quadra 67. At the same time, the story is intertwined with documentary material of past utopias and planned cities.
In the collaboration of an animator with a programmer, a musician, as well as a character player, an atmospherically dense composition of different means is created. The live animation film interweaves views of the apartment complex with computer simulation, texts and effects. The result is a multi-view collage that spreads out before the audience on a curved panoramic screen. Programmed code reacts to film scenes and spoken word.
SUPERQUADRA shows the construction of a city, the making of a film, and a research on the question of how architecture plans society and how society designs architecture. The work on the material takes place before the eyes of the viewers. At the same time, each film image is connected to the moment of its production: living spaces and city views are constructed on stage and manipulated in front of the camera. The transformation of Super-Quadra 67 becomes a real event.

"Brasilia has no history, the city is pure theory. An ideal, the optimum - but only on the drawing board. Brasilia is a backdrop. Thought out and conceived down to the last detail. It seems to be perfect. This city. This machine. The layout of the city resembles an airplane. More future is probably not possible.
It was not suited to real life. People don't like to live here. Obviously, they're not necessarily looking for an ideal. They're looking for a home." 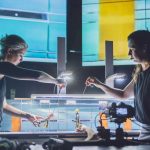 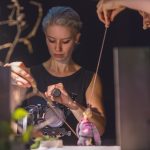 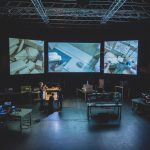 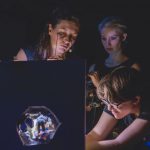 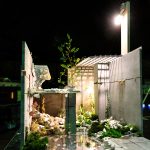 « In a one-hour live video performance, F. Wiesel create a parallel world to modern architecture. The camera roams through wooden sets that most magically and perfectly dismantle the perfectionism of 20th century architectural endeavors. [...] In perfect timing, a bizarre multimedia spectacle unfolds - of individual resistance against a world that has been optimized to the end, in which the performers themselves, however, must become service providers of a process that has been pre-programmed down to the last detail. Which they succeed in doing perfectly. "

" [...] this year, the multimedia puppeteers of F. Wiesel presented their fascinating, detailed spectacle "Superquadra" in the impressive Multihalle - a remnant of the 1975 Federal Garden Show, which has recently been put up for political disposition due to its dilapidated condition. So the festival, with its often political, engaging programming, always reaches into the city. "

" [...] This can be trivial or such an apt, whimsical theatrical essay as in "Superquadra", which one would like to read again. The German duo F. Wiesel from Giessen uses the Bauhaus concept of the "living machine" as a hook and ironically designs a massive living quadra of the future, in which we again become prisoners of the supposedly liberated living. [...] "

" [...] Leading even further into the future is the ingenious dystopia "Superquadra" by the group F. Wiesel (Hanke Wilsmann and Jost von Harlessem). At the center is the design of a perfect architecture, an artificial paradise of corridors, futuristic welfare culture and efficient administrative processes. But what happens when humans begin to break out of the perfect prison? Instead of real actors, the directors rely on small puppets that can be moved with the help of magnetic metal rods. In miniature rooms erected on the stage, we follow the path of the mail man Oskar, whom we can see large on a huge screen via an ever-present camera, until he disappears in a fourth dimension at the end - a frightening construction set simulation including a human being who turns out to be nothing more than a particle in the gears. Thus, after this festival, countless impressions remain as well as the realization that theater, even after countless avant-gardes, is nevertheless capable of reinventing itself over and over again. "

" [...] Highlight at the end: The most exciting and elaborate, however, was certainly the live video performance "Superquadra". The artist formation F. Wiesel tells of a future in which buildable land is scarce and a huge, nested building is constructed, able to accommodate four million people. With small figures the life of three inhabitants of the Superquadra is shown.

In dollhouse format, they show the life of Oskar, who delivers the mail in the Superquadra. Duch by the many, crazy projects of the other residents he is soon prevented. The camera zooms in so close to the characters that you can watch them in life-size on the screen. Through delicate touch and perfect timing, the actors managed to capture [the] life in Superquadra. (...)
This makes performance art accessible to everyone. It makes abstract issues imaginable and also packages them in such a humorous and personal way that I just had to surrender to it. "